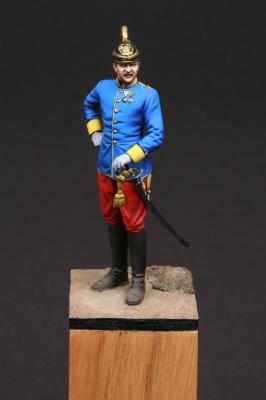 Description:
The most traditional cavalry units of the German part of the Austro-Hungarian Empire were the Dragoon regiments. The distinctive helmet and colourful uniform made their look unmistakable. The 15 Dragoon Regiments were mainly recruited from the German part of the Empire among them were many of Czech origin. Our figure is based on a picture of Dragonerregiment Erzherzog Joseph No.15 but can be painted in any of the 15 Dragoon regiment member by changing the facing colour of collar and cuffs, and the buttons. Further reading of the uniforms: Verlag Militaria - Stefan Rest (Editor) The Emperor’s Coat in the First World War